Talk on aeroplanes: In November Vivienne O Halloran and David Courtney came in to talk to 2nd class on air travel. Vivienne works as an air hostess with Aer Lingus and she told us that she checks the luggage, shows the safety drills to the passengers, brings out the food on the trolley and she also has a radio in her office and speaks to the pilot during the fight. She told us that the Antonov , which is a Russian cargo plane is the largest plane in the world. It has eight engines. Every Aer Lingus aeroplane is named after a saint.

David is a pilot with Ryanair. He told us that he has a compass in the cockpit that tells him where to go- Red means danger and don’t go there, yellow means to stay away from that area and green is nowhere near danger. He said geese are very dangerous for pilots as they could cause an engine to stop. He told us that thunder storms are also very dangerous for aircraft. He told us all about the pilot whose plane was going to crash and he landed the plane in the Hudson River in New York and saved all the passengers

By Ella Courtney and Lauren Quinn 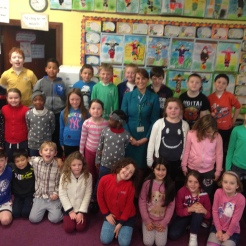