Fifth Class have been working hard on their project entitled ‘How to win an All Ireland Final’.  They recently attended the ESB Science Blast at Mary Immaculate College in Limerick where they proudly diplayed their efforts.  Read more here.

Senior Infants and First Class recently enjoyed an afternoon of friendly rivalry in Gurteen, where they participated in a blitz competing with the other schools in the parish.  Read more here. 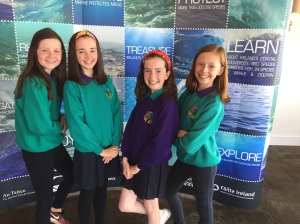 As part of the Intel Mini Scientist competition, a group of Fifth Class girls completed a project on Blue Flag Beaches.  They were delighted to be invited to the Awards cermony in the Armada Hotel.  Read more here.